What role does HNRNPC play in the pathogenesis of GBM?

This article will focus on HNRNPC mouse model and new research progress. The establishment of these mouse models is helpful for research on the function of the hnRNP C1 and C2 proteins and the regulatory expression of the splicing factor hnRNP C. Insight into new research results is the key for researchers to keep up with hotspots.

The research results of the most of researchers in the past show that mice homozygous for HNPNPC gene trapped allele fail to undergo gastrulation, appear to arrest at the egg cylinder stage, and are resorbed at various times thereafter.

Williamson D J et al. Found that the C1 and C2 hnRNPs are not required for any essential step in mRNA biogenesis; however, the proteins may influence the rate and/or fidelity of one or more steps, hnRNP C is essential for postimplantation mouse development. To characterize phenotypes associated with viral disruption of the C1/C2 gene, they injected the 4A4 ES cell line into C57BL/6 blastocysts (53). The resulting chimeras transmitted the 4A4 provirus to their offspring. Mice heterozygous for the provirus were normal in all respects. However, mice homozygous for the disrupted hnRNP C gene were not detected in over 220 offspring produced from heterozygote crosses (data not shown). This analysis included progeny obtained after nine backcrosses into a C57BL/6 background; therefore, transmission of the 4A4 provirus appears to be tightly linked to a recessive embryonic lethal mutation[1]. 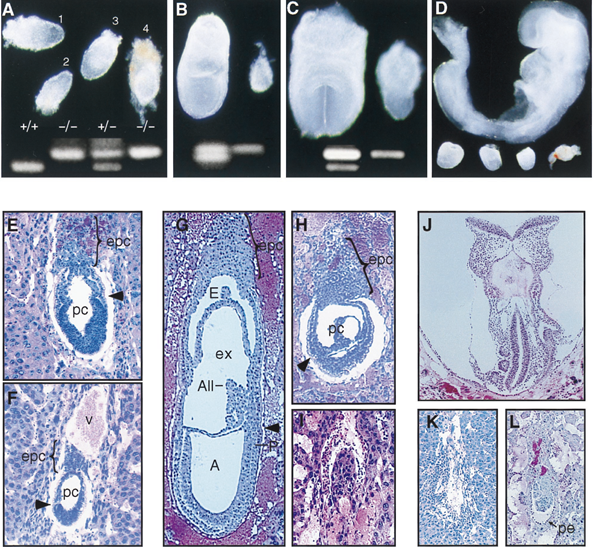 (A) At E6.5 mutant embryos not yet resorbed were slightly smaller than normal littermates (the rightmost is still surrounded by Reichert’s membrane).

(B to D) From E7.0 to E8.5, the size difference of the mutant embryos (right and bottom) is clearly appreciated. While normal embryos undergo a rapid cellular proliferation and morphological transformation, surviving mutant embryos appear to grow only slightly, and by E8.5, many were necrotic (rightmost) and difficult to separate from maternal tissue.

(E, G, and J) Sagittal sections of normal embryos at egg cylinder (E), late streak (G), and early somite (J) stages. (F) Presumed mutant embryo at the egg cylinder stage. The embryo is smaller than normal littermates, the demarcation between embryonic and extraembryonic regions (arrowhead) is not clear, and the ectoplacental cone is underdeveloped. (H) Mutant embryos at E7.5 failed to undergo gastrulation and appear similar to normal E6.5 embryos. (I) A more severely affected embryo undergoing resorption. This embryo appeared to be misoriented with regard to the mesometrial axis (all embryos are oriented with the mesometrium toward the top of the page).

(K) By E8.5, the resorption process for most mutant embryos was nearly complete.

As shown in Fig. 1, embryos homozygous for the hnRNP C mutation were easily distinguished from wild-type and heterozygous siblings by E7.0. At E6.5, surviving mutant embryos appeared similar to but slightly smaller than wild-type and heterozygous littermates (Fig. 1A, embryos 2 and 4). The process of gastrulation begins at about 6.5 and transforms the bilaminar egg cylinder into a multilayered embryo as cells migrate through the primitive streak to form an intermediate mesoderm layer. However, none of over 130 mutant embryos displayed morphological features of early gastrulation (Fig. 1B to D). Histological analysis (Fig. 1E to L) confirmed that mutant embryos progress to the egg cylinder stage (Fig. 1F) but failed to display any specific morphological defect that would account for embryonic lethality. Regardless of gestational age, mutant embryos appeared to arrest at the egg cylinder stage and were resorbed at various times thereafter (Fig. 1H, I, K, and L)[1].

Wang L C et al. found that HNRNPC is a vital participant in the malignant progression of GBM and might be valuable for prognosis.They used western blot, RT-PCR, and immunohistochemical staining to verify the expression of HNRNPC was associated with malignancy and development of gliomas. Similarly, the high expression of HNRNPC had a good prognosis. 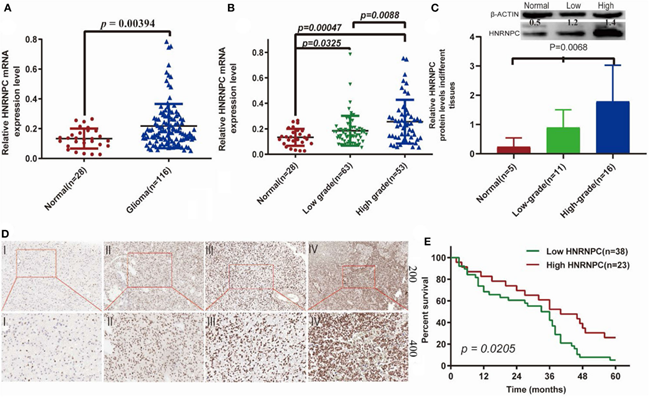 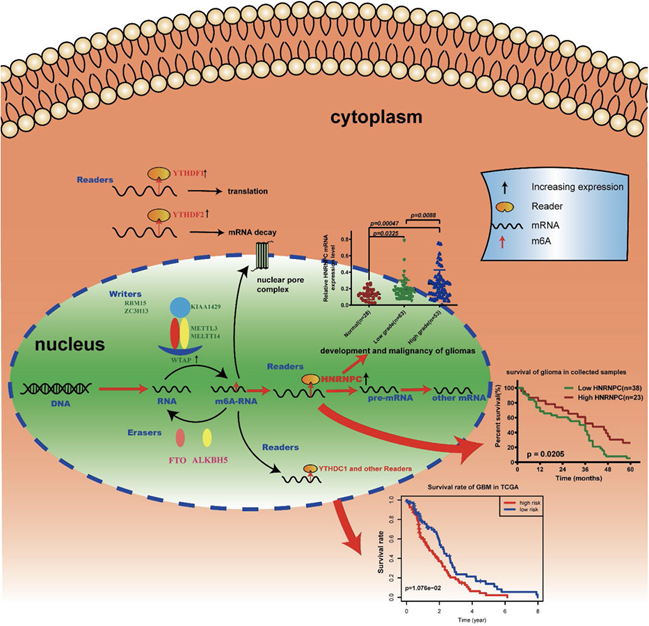 FIG. 3. Summary for the expression changes and potential functions of m6A RNA methylation regulators in gliomas[2].

Their results identified the potential function, prognostic value and expression features of the m6A RNA methylation regulators in GBM and HNRNPC could serve as a key biomarker that might be highly associated with the clinical survival rate, m6A methylation levels, and the malignant progression of gliomas (FIG. 3)[2].

Until now, HNRNPC has been reported to have various functions in several kinds of cancer. Additionally, Wang L C et al study showed differences in HNRNPC expression by RTPCR, ICH staining, and WB. HNRNPC was upregulated in glioma samples based on RT-PCR and WB analyses, and similar results have been presented in glioblastoma by Park et al[3]. They also observed the OS in the glioma which showed that the high expression of HNRNPC might have a good prognosis by Kaplan–Meier method. The result was consistent to prediction in TCGA dataset. There is a lack of IHC evidence showing HNRNPC expression at the protein level in glioma. Thus, they used 25 different grade of glioma tissues that were evaluated immunohistochemically to further study the relationship between the expression of HNRNPC and gliomas in depth, and demonstrated that the expression level of HNRNPC significantly contributed to malignant progression of glioma. All the results indicated that HNRNPC could be a new therapeutic approach to predict diagnosis and prognosis. However, additional experiments to identify the mechanisms of HNRNPC are urgently needed.

【Gene of the Week】대사, 심혈관 등 질병 관련 유전자 SIRT3
Application of Gene Therapy in Mucopolysaccharidosis IVA (MPS IVA)
The‘culprit’of Osteoarthritis-ADAMTS5
Uses of Humanized Mice in Tumor Immunotherapy Study
We use cookies to ensure that we give you the best experience on our website. To learn about how we keep your information safe, view our Privacy Policy. OK Privacy policy