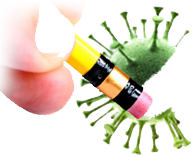 HIV infection affects more than 35 million people worldwide. Over the past three decades, progress has been made in HIV treatment, mostly through the use of antiretroviral drug therapies, yet there is no way HIV can be eradicated from infected cells….Or is there?

Scientists at several research institutions have now shown that genome editing technologies such as CRISPR/Cas9 may soon be used to treat HIV infection, maybe even completely erase it!

■ A group at Kyoto University, led by Yoshio Koyanagi showed that the CRISPR/Cas9 system can be used to edit an integrated HIV genome. They were able to suppress HIV gene expression by mutating the viral LTR and also used CRISPR/Cas9 to excise HIV provirus from host cells. (Ebina et al 2013)

■ At Temple University, KamelKhalili’s team took a similar approach, but first they identified specific target sites in the integrated HIV genome that can efficiently edited by CRISPR/Cas9. They then targeted these sites to inactivate viral gene expression and replication in infected T-cells, microglia, and monocytic cells. They also showed that HIV infection can be prevented by stably expressing guide RNAs within Cas9-expressing cells. (Hu et al 2014)

■ Around the same time, a group led by Derrick Rossi and Chad Cowanin Massachusetts used the CRISPR/Cas9 system to attack HIV in a different way. They collected primary human T-cells and hematopoietic stem cells (HSCs), and used CRISPR/Cas9 to target B2M and CCR5, two clinically relevant genes in HIV infection. They also showed that HSCs that have undergone genome editing retain their multilineage potential, which opens the door for hematopoietic cell-based therapies. (Mandal et al 2014)

For more than 30 years, researchers have searched for ways to cure HIV. Now, with the power of genome editing technologies such as CRISPR/Cas9, a cure may be possible.

What are you going to do with the power of genome editing?